Various musings on the books that I've read....

The Old Man and the Sea I decided to read this book last night for the Popsugar challenge and I finished it within a few hours.

There are some great imagery described by the author in this book, although I am not sure I totally grasp the deeper meanings that are contained within the story.

I enjoyed the story in itself, even though it was a simple one. I liked the fact that the old man continued his fight, and never gave up even when everything was against him. He still had hope.

I think I will need to give it a second reading sometime in the future.

Of Mice and Men

This is a book that has an ending that shakes you to the core and stays with you, long after you put it down. While it's true that some aspects of the story could have been better written, I felt that the book did it's job by drawing me into the situation that was presented and making me feel for the character of Lenny emotionally.

With all that said, It is a rather depressing story and I doubt I could ever read it again.
Tweet It was a pretty average book to be honest, nothing outstanding. The descriptions became rather tedious and I had to force myself to keep reading the book. When I finally got to the end I felt disappointed, maybe I was expecting too much?
Tweet This was my first time ever picking up a book by Cathy Glass, and I managed to finish this book in about 4 hours in one sitting.

I found this story to be absolutely heart wrenching, and difficult to put down, once you get into it..The beginning started off a little slow but, then picked up pace about three chapters in. About halfway through the story, things started becoming clearer, and then suddenly the revelation of, and the full horror of what has happened to this poor girl, hits the reader all at once.

Cathy Glass's writing is very easy to understand and to read, it flows along easily as well. There are not a lot of unnecessary descriptions, and the chapters are rather short. Therefore, the story moves along at a nice pace.

I recommend this book to anybody who enjoys reading true stories about children in foster care, and the problems that they must overcome in their lives.
Tweet

I am Haunted: Living Life Through the Dead 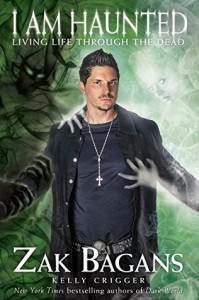 I found this book rather interesting, and informative, it rather a quick read and easy to understand.
A must read for those who enjoy the Ghost Adventures show, or are into the Paranormal in general.
Tweet

My Horizontal Life: A Collection of One-Night Stands I had this book for a while and decided to give it a read, I had no idea who Chelsea Handler was, but I had heard that this was a funny book, and I needed something fun and light to pass a few hours.

I noticed some of the reviewers on here were complaining about how disgusting this book is, and I wonder whether they read the same book I did?, or if perhaps they needed some sort of humour transplant?

This book isn't a step by step detail of the one night stand's Handler had but, more about the funny situations that occurred around it. It was pretty laugh out funny in some parts, especially at the beginning and in the middle but then, it became less funny towards the end, and that is when I started realising Chelsea's life was in fact pretty empty, with no real depth. Then again, perhaps that is what Chelsea meant the book to be...Just a collection of funny anecdotes with no real depth,Which was fine by me.

Anyway, it was a very quick and light read and I finished the book, within 3 hours believe it or not!
I would definitely give another one of her books a go, the next time I want a something light and fun to read, that doesn't press too heavy on the old braincells.
Tweet

The Girl on the Train: A Novel I found the story to be rather depressing and slow at the beginning but then it picked up somewhat towards the middle. I found the characters not very likeable, and I really couldn't stand Anna. Rachel seemed to be the only decent person within the story. There were no situations within the novel that were pleasant and some parts were not very well developed.

The ending was rather good but that was about it. It was a pretty average novel, in my estimation, nothing outstanding. Well, I finished this book earlier today and I found the first few chapters lagging, but then it started to pick up pace around the middle of the book and that is when I started to really enjoy it.

I liked the way the author kept feeding us the story drip by drip, which kept me reading, just to find out what happens. I found the whole situation really disturbing, and felt that I was living inside the mind of a psychopath (or psychopaths!) during those few hours that I read this book.

I was a little stunned at the end though,especially since I have not seen the movie and so I didn't know what to expect. All in all, it made an enjoyable afternoon of reading for me.

Snow Flower and the Secret Fan It just took me a day to read this book, I found this to be a very bittersweet story all about the friendship between two women in China in the late 1800s.
Tweet

The Cupboard Under the Stairs: A Boy Trapped in Hell... Absolutely horrific story about a little boy trapped in a living hellish nightmare. There are no words to describe how I felt towards the evil b*&tard that is this boy's supposed father. Paul is such a brave person to write his story and also, to campaign for other victims of child sexual abuse. I only hope that he is at peace and is happy with his life these days. Goddess bless you Paul.
Tweet

All Cats Have Asperger Syndrome Along with Hamlet, This was one of my favorite text books from Secondary School.
I still have my school copy, complete with handwritten notes at the side of the pages. There are some wonderful poetry contained within.
Tweet

The Teashop on the Corner I am not usually into Chick Lit, but I really enjoyed this book.
It was rather bittersweet, and the variety of the characters and their stories kept me hooked!

Finding Me: A Decade of Darkness, a Life Reclaimed: A Memoir of the Cleveland Kidnappings Again, just like Jacee Dugaard's book, I found this book rather hard for me to stomach in parts because some of the details were absolutely horrific.

However, I managed to finish reading this book within 2 days. It was absolutely heart breaking and gut wrenching to read about Michelle's experiences of : growing up within a tough environment full of abuse, losing custody of her only son and then being kidnapped and held within Castro's house for over a decade.

I commend Michelle's bravery and strength, and commend the fact that she never forgot about seeing her son again, even on her darkest days.
By the end of the book, I was profoundly disturbed by the story, so much that it stayed with me long after I finished it.

I really hope that Michelle finds the peace and happiness in her life that she so badly deserves.
Tweet I started reading this book a long time ago, and I had to take a break from it for a while because a lot of the graphic details were too much for me to stomach. However, I decided to give it another shot because I wanted to see what happened to Jaycee, when she got older and was found etc.

Even though the writing was all over the place, for me it was both, disturbing and sad to read about the horrific situation and the awful abuse that Ms Dugaard had to endure during those 18 years. What amazed me throughout the story, was the fact that Jaycee still had a heart full of kindness, purity and hope, even after going through such a horrific experience. I also commend her on her strength to keep things going for the sake of her children.

By the end of the book, I was in tears because I felt so bad not just for Jaycee, but for her children as well as her mother. I only wish that both Jaycee, and her daughters have nothing but happiness, peace and best wishes for the future, they deserve it.
Tweet

The Demonologist: The Extraordinary Career of Ed and Lorraine Warren It was pretty good at first, the stories were spooky enough but then it got too repetitive for me, especially the part about Demons and not inviting them in etc.
Tweet